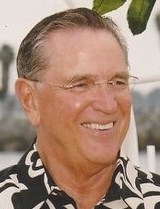 Edward Bruce ‘Ned’ Huntington
July 13, 1938 – February 12, 2021
San Diego
Sadly, the family of retired Superior Court Judge Edward Bruce “Ned” Huntington announces his death from heart disease at age 82 on February 12, 2021. He died at his home on the bay in San Diego, California, attended to with loving care by his wife, Terri, whom he married in 2003. Mr. Huntington is also survived by his former wife Marjorie, their daughter Jessica (Mike), their son Adam, his stepson Tyler (Meagan), and four step-grandchildren. Judge Huntington, whom friends and family alike called “Ned,” was born in San Diego on July 13, 1938, to Ben and Julia Huntington. His two brothers, Lee and Richard, predeceased him. He attended Point Loma High School and San Diego State University, where he was Men’s Student Body President and received a B. S. in Accounting.Ned left San Diego to attend the University of California Hastings College of the Law in San Francisco. With his characteristic sense of humor, he once commented that Marjorie worked his way through law school. Continuing his pattern of leadership, Ned was Senior Class President at Hastings and received a J.D. degree in Law. After passing the California Bar Exam he immediately returned to his beloved San Diego. Ned later added to his legal education by earning a Master of Laws (LL.M) in Taxation at the University of San Diego.Upon his return home, Ned went to work as a Deputy in the Office of the San Diego City Attorney. A year later, when a young lawyer named Pete Wilson left his job with the Republican Associates of San Diego County, Huntington took that job as Executive Director for a year. From 1969 to 1975 he was a partner at Huntington, Bryans, Harper, Henderson, Burney and Newman-Crawford, a law firm created in large part with other Deputy City Attorneys. In 1972 he even found time to study for and obtain a real estate license. From 1976 to 1987 Ned presided over his own law corporation, and from 1987 to 1995 he was a partner at Huntington & Haviland with Warren E. Haviland, Jr. Marjorie Huntington was admitted to the Bar in 1989 and joined the practice.As busy as he was in the 1970s, Ned ran for the State Assembly and also for the City Council, believing that law is the best background for a legislator. After losing both races he said, “That put an end to that.” Ned was so devoted to the practice of law that he became a California State Bar Board Certified Specialist in both Family Law and Taxation. He was the only lawyer in the State of California with that double certification. In 1995, former Governor Pete Wilson appointed Huntington to the Superior Court Bench, and he was subsequently re-elected until he retired in 2008. Ned spent all but two of his twelve years on the bench in Family Court.Huntington was active in associations that promoted high standards in the practice of law, often providing leadership as president or vice-president. He served variously as a director, vice-president and president of the San Diego County Bar Association; vice-president and member of the Board of Governors of the State Bar of California and chairperson of the Discipline Committee. He was a member of the American Bar Association, the Family Law Specialists, and both the Family Law Executive Committee and the Taxation Committee. Huntington also was a member of the local San Diego Trial Lawyers Association, the Lawyers Club and the Barristers Club. He used his knowledge to teach others when he served as a lecturer, instructor or adjunct professor at local law schools and Continuing Education Programs for the State Bar.He became a Fellow of the American Academy of Matrimonial Lawyers in 1983 and was honored as the Southern California Chapter’s Family Law Distinguished Jurist for 2006. Many awards came his way over the years: 1962, Outstanding Graduate, San Diego State University; 1968, one of San Diego’s Ten Outstanding Young Men; 1991, “Norby” Award as Outstanding Family Law Attorney; 1995, San Diego Bar Association Legal Professional of the Year; 2002, Hastings Alumnus of the Year and named an Outstanding Alumnus in other years; and in 2015, American Academy of Matrimonial Lawyers Lifetime Achievement Award.Ned also participated in sports as a lifelong avocation, including golf since his days on his high school golf team, biking, snow skiing, water skiing, surfing, fishing and boating. He was especially fond of OMBAC, Old Mission Beach Athletic Club, and the San Diego Over-The-Line Tournament. He was an early computer “techy” and wrote commentary and how-to articles on a website he once maintained. By the time he went to law school, Ned had worked many blue-collar jobs, which indelibly stamped on him how hard people work to scrape by in life. He had learned what it was like to live from paycheck to paycheck and that knowledge was an invaluable foundation for a judge sitting in the Family Law Court. Ned Huntington was an honorable man with a great sense of humor who loved life, his hometown, his family, and his friends with gusto.At this time, no formal service or memorial is planned. In lieu of flowers, donations to the American Heart Association or to Pro Kids First Tee, San Diego would be greatly appreciated by the family. Donations may be made at www2.heart.org or by mail to Pro Kids First Tee, San Diego; 4085-52nd Street; San Diego, CA 92105.

Who Goes From President to Prisoner? – OZY