In Praise of Surf Moms


Moms are the best. They – quite literally – give us life, they guide us into this crazy world, and they do it all with a badass attitude. And surf moms take it a step further. From shuttling the groms to and from the beach, to constantly reminding us to wear sunscreen, to introducing their young to the ocean (and sometimes before they’re even born). Yeah…surf moms are just plain rad. It can be a thankless job, hence why they deserve to be celebrated – on Mother’s Day and every day.

And so, in honor of the holiday, we decided to spotlight a few surf mamas, and to hear about what it’s like raising kids in the water, how they still find time to surf, and sharing the love of waveriding with their little ones.

“I found out I was pregnant the first time in the middle of shooting my documentary, Unstoppable, but I always knew I wanted to be a mom. Throughout the pregnancy, I started to embrace it. And looking back now, I wouldn’t have wanted it any other way.

“Being a mom comes with the sense of responsibility, so it definitely impacted my life as a surfer. I wouldn’t want to die; I want to be there for my children. But I don’t let that fear stop me from pushing myself or loving my time in the ocean.

“It’s not optional for my kids when it comes to surfing. [Laughs.] They’re going to be surfers no matter what. But I say that in the most loving way possible. There’s a fine line of being like that aggressive soccer parent, where you push them too hard, and it turns them off of it. But then there’s the other side of not empowering them or encouraging them enough. The ocean can be intimidating, and you need to guide them and get them comfortable in the water.. 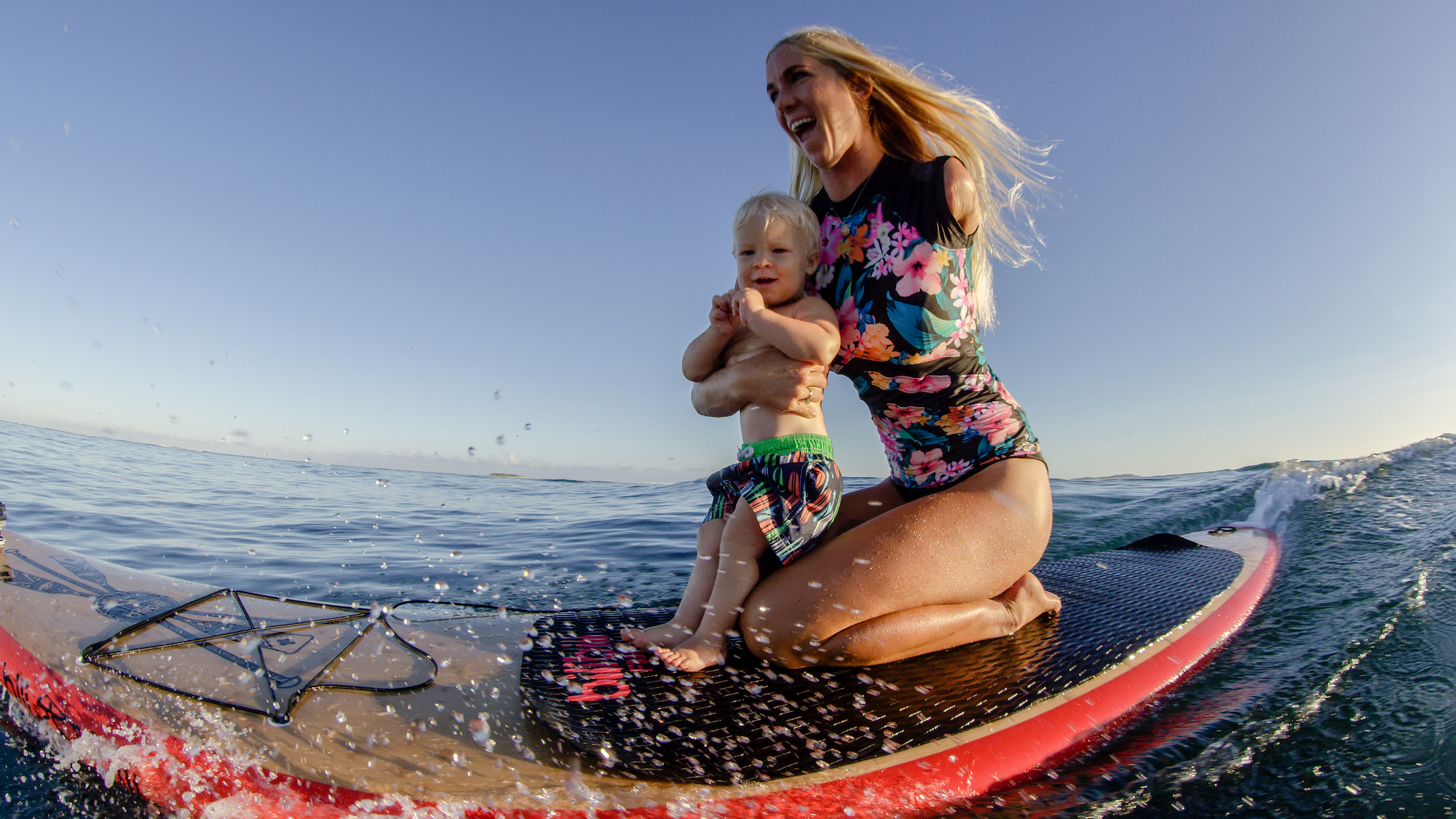 Bethany and son Tobias in between heats in Fiji. Photo: Aaron Lieber

“In February I had my third child, and I’ve surfed throughout all my pregnancies. I usually surf until about six-and-a-half or seven months. I usually feel pretty good. From five months and on, it does get a little more challenging. But I just get a bit more picky with my wave selection. I prefer a reefbreak with a channel, so you’re not duckdiving a ton. You also need a wave with a little more power, because at that point you have more weight, and you need something that’s gonna push you and keep you afloat. The wave does more work for you then

“This morning I went to go check the surf, and as I was about to leave, my eldest son said, ‘I love you, mom!’ It was my high of the morning. The waves ended up being really bad, but that just totally made my day. It didn’t matter that the waves weren’t good; I still had that little moment which made up for it. The reality is that you’re not going to be surfing as much when you become a parent. But it’s worth the trade-off.” 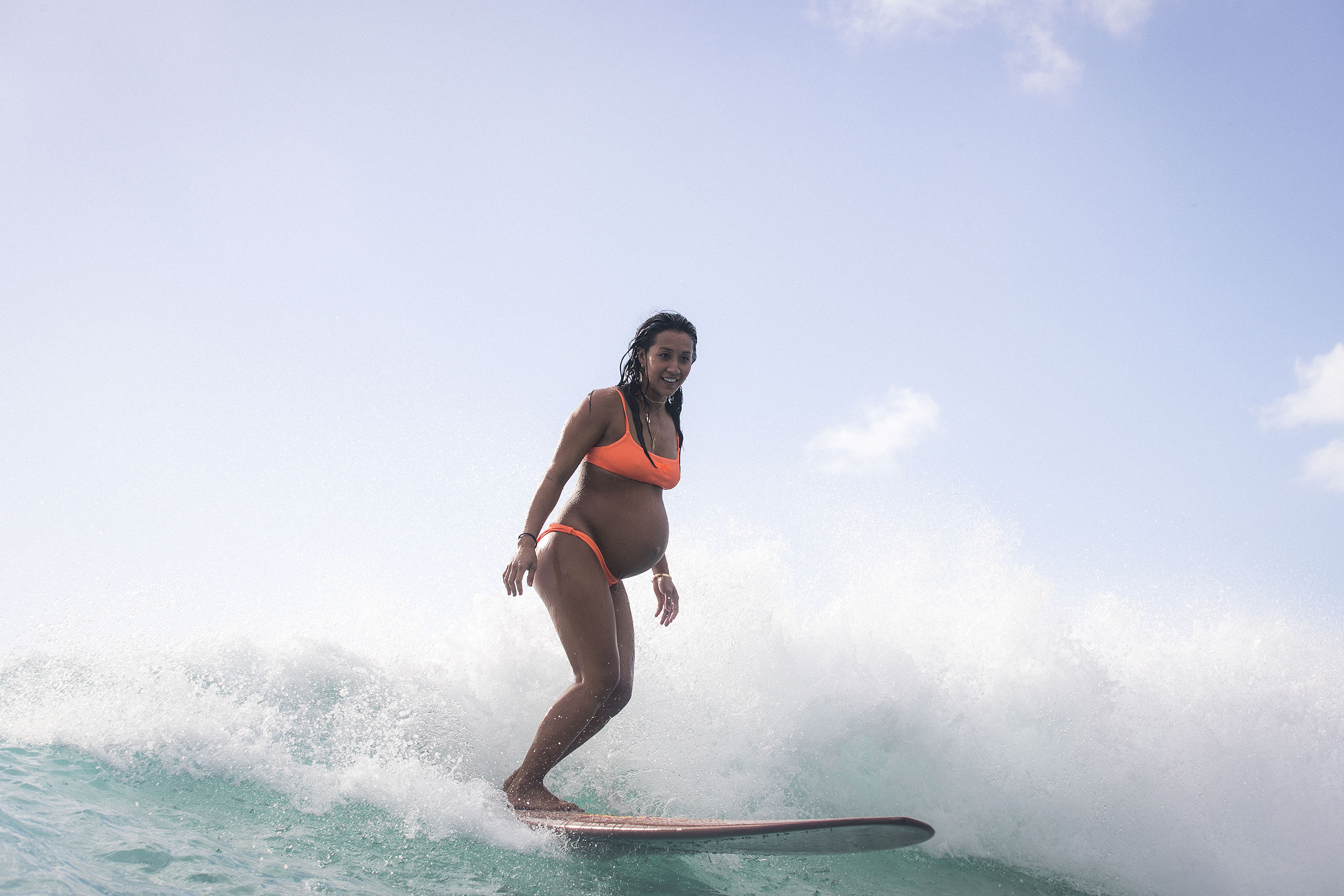 “I’ve always wanted to be a mom, but it’s a scary thing to pull the trigger. I got pregnant right before COVID hit. And it was scary to tell sponsors, but everyone was so supportive. Anyone who knows me, knows I love kids. It wasn’t a shock to anyone. And it kinda worked out with COVID – it gave me the time to be home and to really embrace the experience.

“Before anything, I just knew I wanted to be a mom. Obviously there’s parts that are scary – like wondering about how my life was going to change. But such is life. And if nobody was going to support me for this part of my life, then those partnerships ultimately didn’t matter. Fortunately, everyone was so onboard. I was supported through the entire pregnancy, and I think it made those relationships even deeper through my partnerships and sponsorships. Not all women get that support. I was very lucky.

“Surfing takes a lot of time, and you’re so dependent on swell and tides – so, I don’t really get that luxury anymore now that I have a kid. [Laughs.] There’s only certain windows I get, so I just hope and pray that the waves will be good. But it also makes you appreciate that time you do get so much more.

“The way I was raised, my dad never forced us to be surfers. He just wanted us to love the ocean. And I feel like that’s why I love surfing so much. There was no pressure. I don’t want to put that on him. He may hate surfing, and that’s fine. I just hope that he enjoys the ocean. It’s a huge part of our family. And he already loves the water, so I don’t foresee a problem there. As far as being a professional surfer goes, I do not expect that at all. Whatever he decides.

“It was really interesting surfing while I was pregnant. I surfed throughout the whole pregnancy, almost more than I have over the past three years. It actually felt really good. What’s interesting is that it’s been difficult getting back into it post-pregnancy. I think I got used to surfing with extra weight in front of me that it’s been tough to gain my balance now.

“My advice to soon-to-be mothers would be to give yourself and your body grace. Don’t compare yourself to anybody – especially anybody on the internet. Everyone’s body is different. Pregnancy is really hard, but it’s worth it when you have a beautiful, healthy baby at the end of it.” 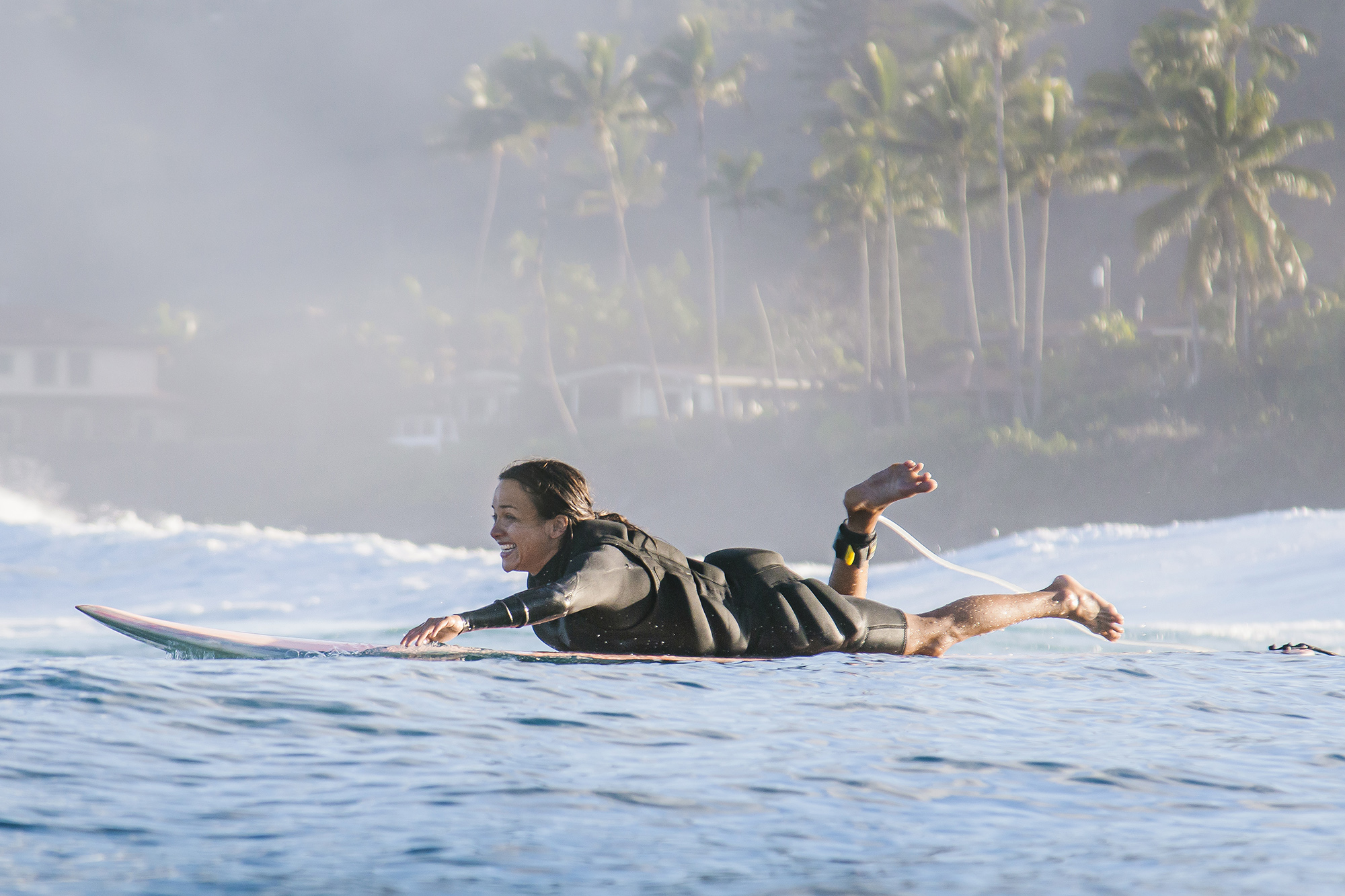 “At first, I was so scared that I was not going to be able to surf. I was depressed! [Laughs.] But that only lasted about one day. I was still going to Puerto Escondido that summer, and I thought it was going to be my last time to surf big waves. I surfed so much, then I came back and asked the doctor, ‘when do I have to quit surfing?’ And he said, ‘whenever your belly doesn’t let you surf anymore.’ Then, I kept surfing until the last day. I surfed the day I gave birth.

“I usually surf big boards, like retro single-fin boards. So, there wasn’t much change with that when I was pregnant. One thing that was different was that my chest was closer to the board to make more room for my belly while I was paddling.

“The first month I was concerned that I was going to be forced to quit surfing. But because I stayed so active, it was so easy for me to bounce back. I only rested for like 15 days after giving birth. Then, I went and surfed Himalayas during a huge swell. After that, I knew I was going to be fine. 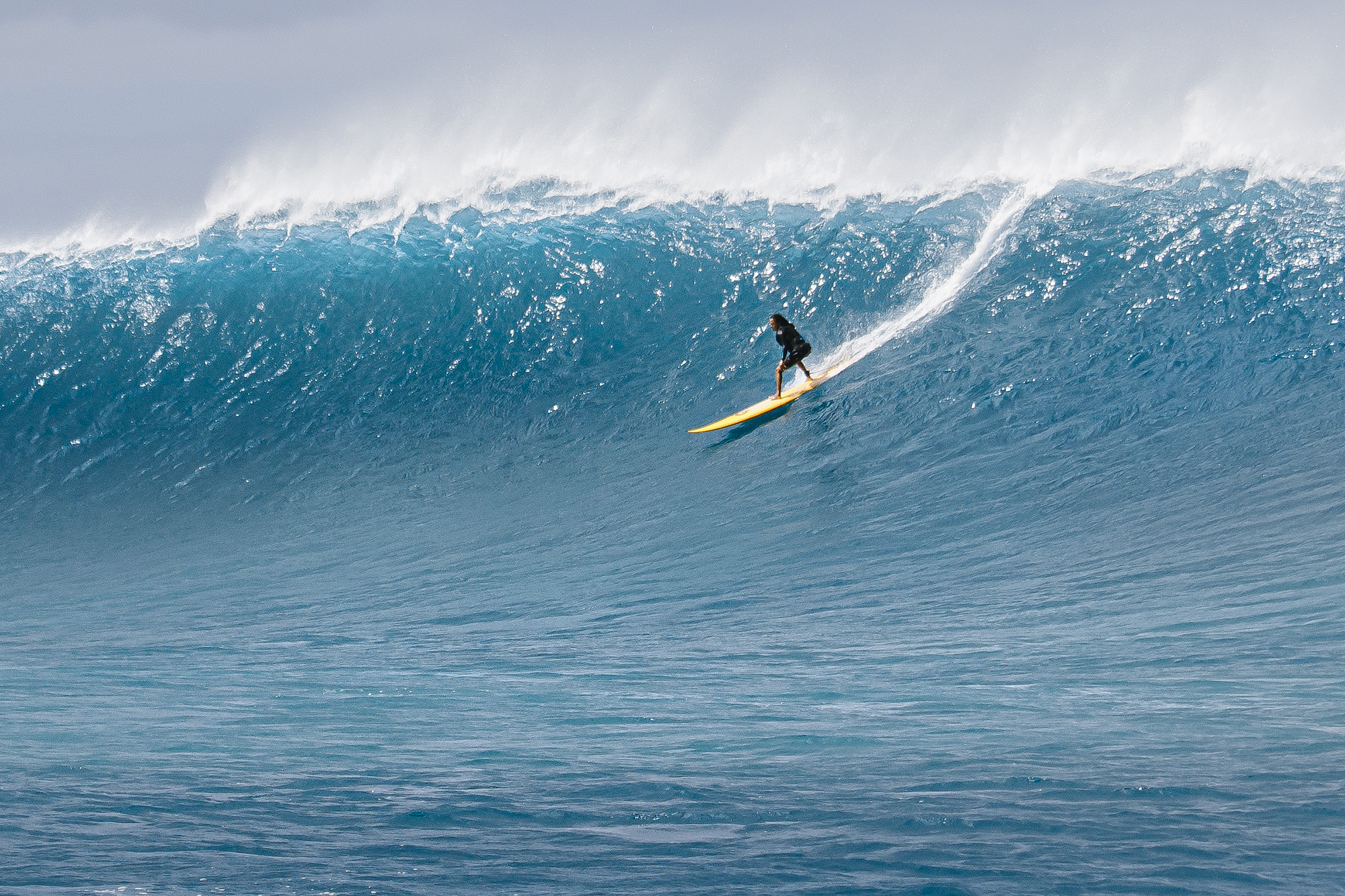 “Now that I have the baby, I don’t have as much time to go surfing. But that being said, it makes my time surfing so much better. I go there, and I focus. Before, I felt like I’d waste a lot of time. I’d stare at the waves and debate whether I wanted to paddle out now or later. Now, when I go I just take full advantage. I surf better now, because I train really hard. Almost every day. I didn’t want to lose who I was, and I wanted to come back better. It’s all about the mindset.

“My mom is a professional ballerina, and she pushed me so hard that I started to hate it. So, I quit and I moved to Hawaii. I never liked dancing professionally. With Maxima, I hope that she loves the ocean. That’s the most important thing. Whatever she wants to be, I just hope she has that connection with the ocean. I would love for her to be a surfer, but most important is for her to love the water.

“My advice for soon-to-be mothers is to not be scared. Life doesn’t have to change 100 percent when you have a baby. You can still be you, and still do the same things you used to but maybe more responsibly and with better time management. I also believe that babies choose the mother. Keep on being you, because your baby chose you because of you.” 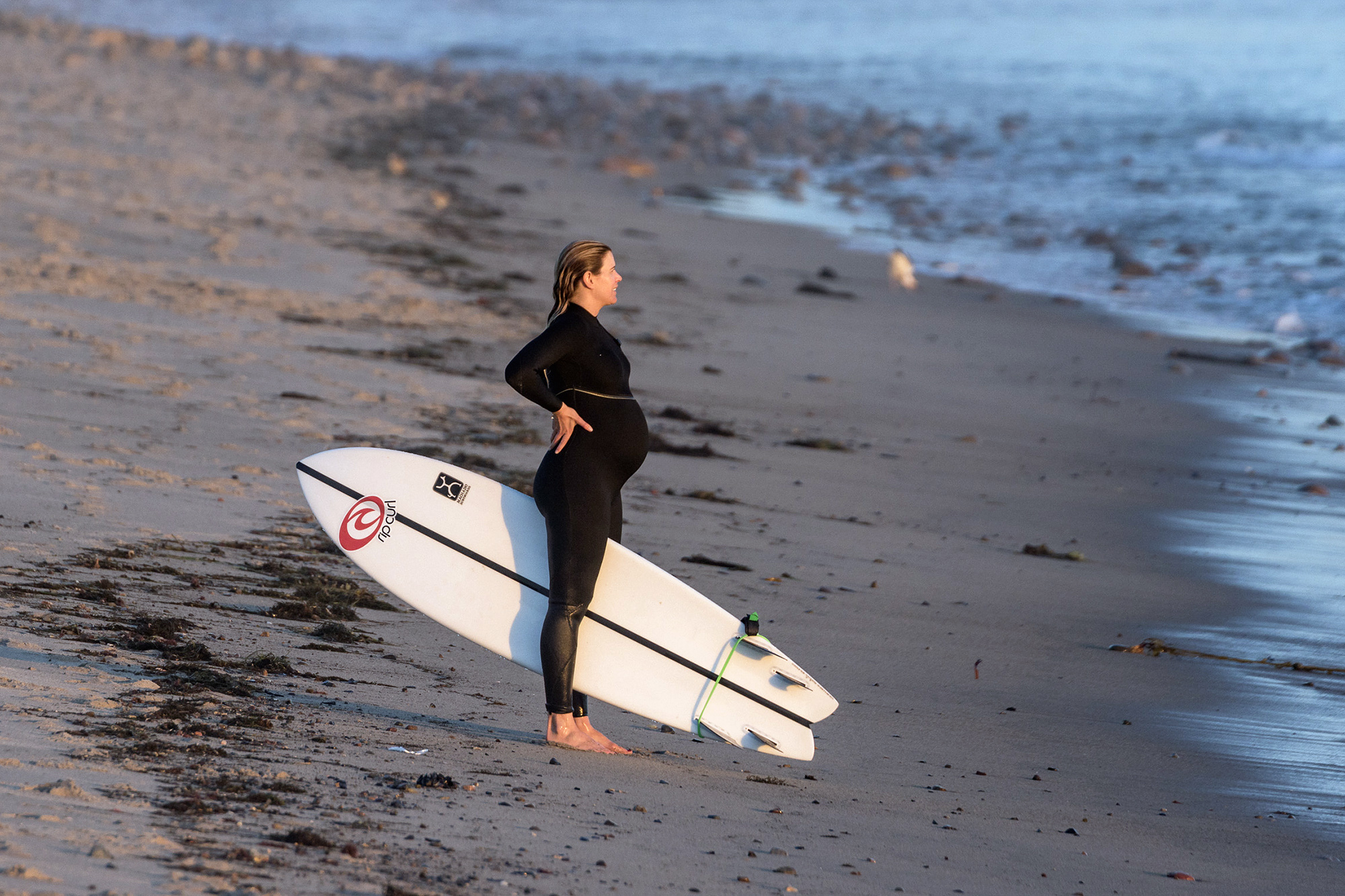 “It was a big surprise for me. [Laughs.] Ian [Foulke] had just gone surfing, and I took the test by myself. I didn’t believe it, so I took another one. It felt like an eternity for Ian to get back from surfing Lowers. But it was pretty fun telling him the news.

“I felt like I’ve had a maternal instinct, but it’s weird with my job and surfing and traveling. When do you find the time, you know? But with COVID and everything, it ended up being perfect timing. It really worked out for our family, and we’re so in love with this little guy.

“For women, you have to factor in your future, how old you are, your career…it’s a big decision. And with surfing, I definitely cherish my time much more when I get to go surf. I don’t care if it’s low tide, freezing cold, or the waves are terrible. I’m just mega-stoked any time I get to go surf. 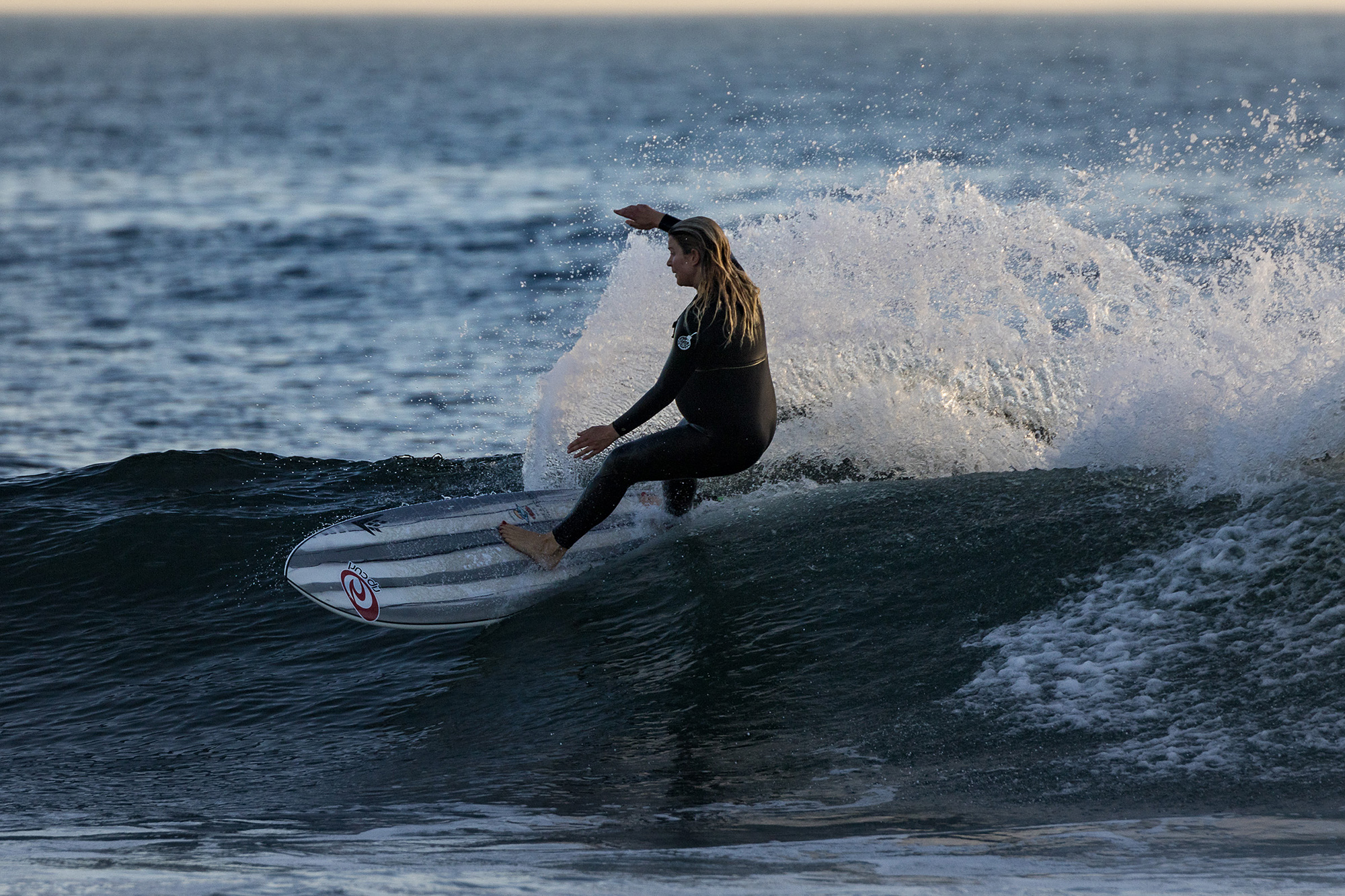 “Surfing while pregnant was amazing. I felt like I was really connecting with the ocean, and connecting with this little being inside me. Surfing throughout the pregnancy really gave me a lot of confidence, too. I feel like it helped prepare me for motherhood and childbirth. But there was a lot to figure out – like weight distribution, wetsuit size, riding boards with a lot of liters, finding the right way to paddle, picking my windows to get wet. But keeping that fitness up was really important and helpful.

“If you’re comfortable, keep surfing while you’re pregnant. I think that was the best thing for me. It was a great motivator to keep me active and healthy. If you’re a surf mom, I highly recommend it.” 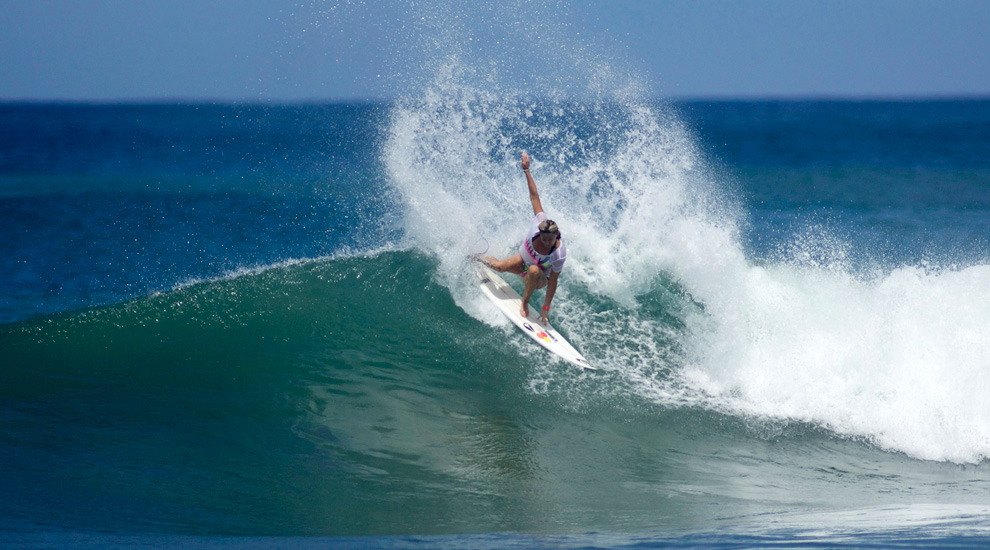 Lisa Andersen is the winningest surf mom of all — her daughter, Erica, was born on August 1st, 1993. Lisa was back competing two weeks later. She kept her seed and won the World Title the following year — and the next three years, as well — all with her toddler in tow.

20 years of ‘Living Like Jay’: Honoring the legend of one of surfing & Santa Cruz’s brightest shooting stars