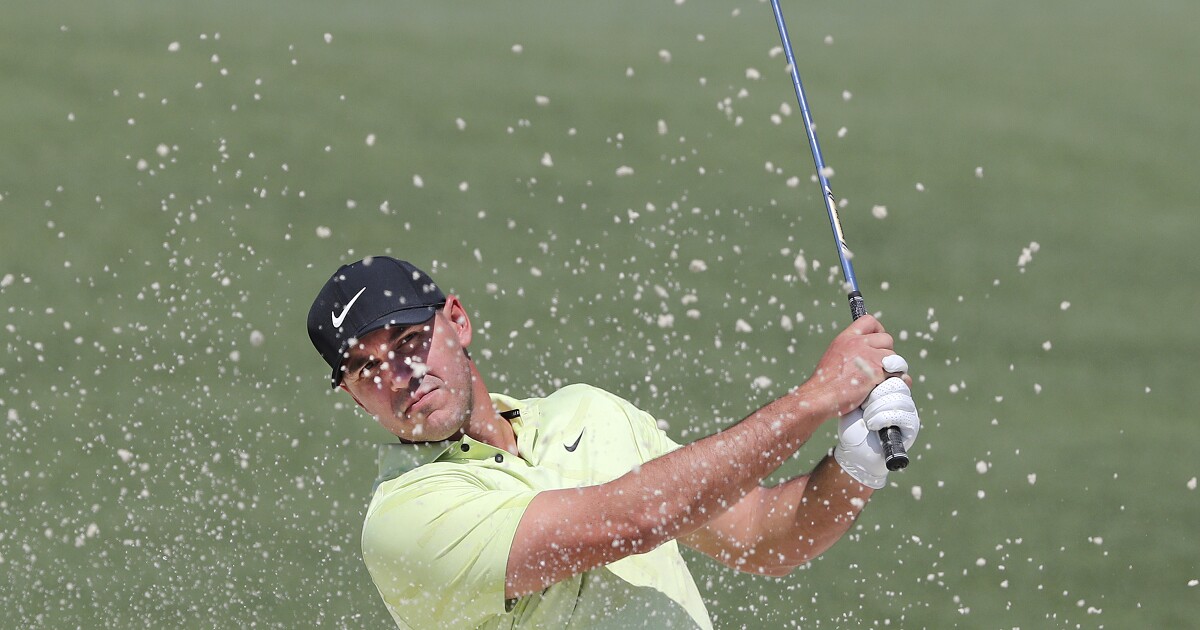 If Brooks Koepka looks a little awkward trying to read putts on Augusta National’s slippery greens, with his right leg locked to the side or extended behind him as opposed to a traditional squat, cut him a break. He had surgery to repair a dislocated kneecap three weeks ago.

But here he is, halfway through the usual six-week recovery, trying to walk maybe professional golf’s hilliest course.

Hitting out of certain sidehill lies brings pangs of pain, which is why he plans to lay back with a 3-wood off the tee at the par-5 13th hole to avoid the extreme sidehill lies farther down the fairway. It also hurts walking downhill, which is something he can’t avoid.

“It puts all the pressure on the patella,” the four-time major champion said. “I’ve got a bunch of — I don’t know even what they put in there — stuff going on in there that can cause a pain right where the brace is. It’s probably the most sensitive spot, so it’s going to pull. It’s going to hurt downhill.”

“I can’t bend down, my knee doesn’t go,” Koepka said. “I mean, that’s the most stress you’re going to have on your patella. I don’t have that much motion in my knee. Prone, I can get it to about 90 degrees and that’s about it. But getting down (to read greens), it’s going to look funny, I know that. But what are you going to do?”

Koepka required three hours of physical therapy just to get him ready to play a nine-hole practice round. Now he’s got to walk 18 … possibly four days in a row.

But his coach says he’s been striping the ball and looks as good as ever. And expectations haven’t changed for a guy who has won two U.S. Opens, two PGA Championships and was runner-up at the 2019 Masters.

“Still the same,” Koepka said. “Yeah, to win. That’s the only reason I’m here. If I didn’t think I could win, I wouldn’t be here.”

Also playing hurt this week is 23-year-old English amateur Joe Long. He was in South Africa six weeks ago and figured it’d be fun to try surfing for the first time.

Tore a muscle in his left leg.

“The surf scene is big,” Long said of Cape Town. “The ones I was on weren’t big. It was my first time. I kind of got a little ahead of myself as well. I enjoyed it, but my friend took us out to the deeper ones, and, yeah, just messed up a little bit.”

Augusta National Chairman Fred Ridley didn’t wait to be asked about the controversial new voting law in Georgia that compelled Major League Baseball to pull the All-Star Game from Atlanta this summer. He addressed it during introductory remarks at his annual news conference before the Masters.

“I believe, as does everyone in our organization, that the right to vote is fundamental in our democratic society,” Ridley said. “No one should be disadvantaged in exercising that right, and it is critical that all citizens have confidence in the electoral process. This is fundamental to who we are as a people.

“We realize that views and opinions on this law differ, and there have been calls for boycotts and other punitive measures. Unfortunately, those actions often impose the greatest burdens on the most vulnerable in our society. And in this case, that includes our friends and neighbors here in Augusta who are the very focus of the positive difference we are trying to make.”

A day earlier, a groundbreaking ceremony was held for a new community center and Boys & Girls Club headquarters in the area that was funded by a $10 million grant from Augusta National.

Which instantly had people presuming Rahm, a Spaniard, is a fan of England’s Chelsea soccer team. Kepa Arrizabalaga is a Spanish goalkeeper who currently plays for Chelsea; Gary Cahill is a defender who played there from 2012 to 2019.

Turns out, Kepa is a Basque name, representative of Rahm’s heritage. And Cahill is Kelley’s maiden name.

“When we were going through Basque names,” Rahm said, “we just had to find one that she could pronounce, and that’s the one we came up with that she really liked. And we used Cahill as the middle name because, in Spanish tradition, usually you take your dad’s last name and your mom’s last name, and I didn’t want her to lose that.”

Want a dark horse pick to win the Masters? How about 23-year-old Norwegian Viktor Hovland?

He’s been playing well on tour, with a pair of second-place finishes this season (including the Farmers Insurance Open at Torrey Pines). And then there’s what happened when Kevin Kisner took him across the border to his hometown of Aiken, S.C., last Saturday to play Palmetto Golf Club.

“He made like nine birdies in 15 holes,” Kisner said, “and beat my brains in on my home track.”

Australia’s Adam Scott, the 2013 Masters champion, was asked about the fast and firm conditions of the practice rounds and whether he’s hoping that the rain forecast for later in the week materializes to soften the course.

“No, I don’t really,” Scott said. “I think it would be a shame if it did. It’s been a long time since we’ve had a really dry golf course. I think it will be fun for everyone playing but also watching to see it play a little dry and see some shots and some strategy. It has been a few years, at least in my memory, since we’ve had to think this hard around here.”