New Zealand surfer saved after scrawling “HELP” in sand reveals Tom Hanks inspiration, how close to death he skirted: “My legs were gashed to the bone and lungs clogged with seawater!” 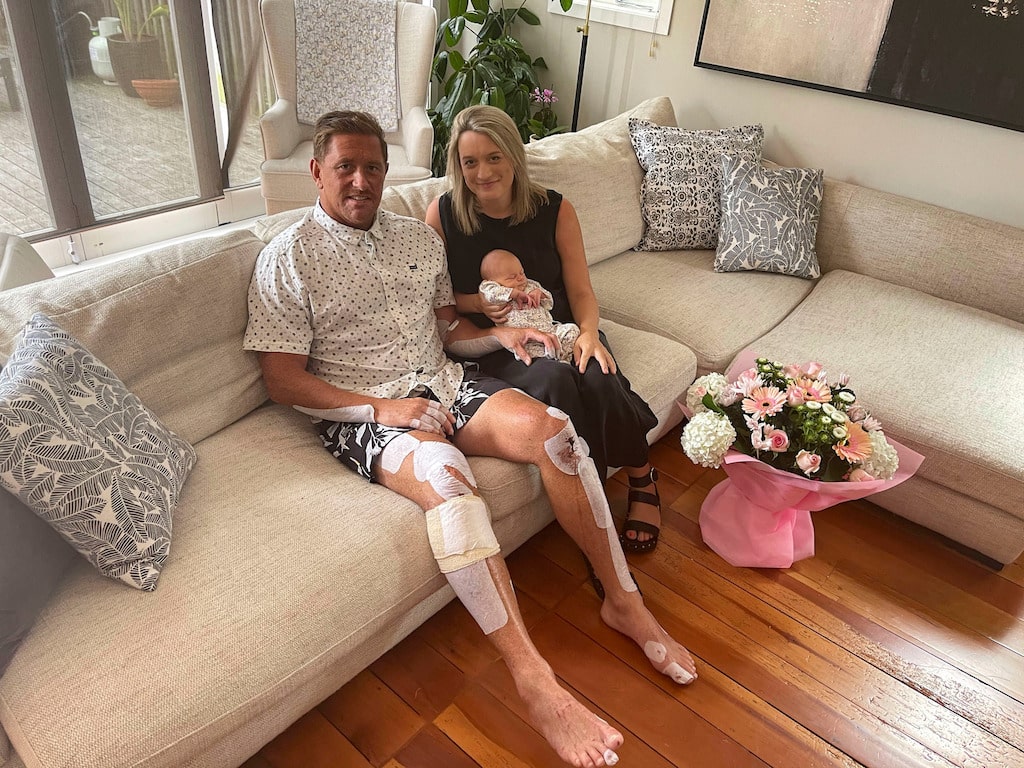 Days ago, now, we all learned the wonderful story of a New Zealand surfer who became bashed on the rocks, made it to the sand, scrawled a giant “HELP” before passing out and was rescued when two hikers saw his plea.

So happy… or at least I hoped so happy.

The original story contained no details on what happened post-saving. Did he make it to the hospital? Succumb to injuries on the way?

I, in any case, named and claimed a joyful ending then held my breath until this very moment when, whew, it has been revealed that Aucklander Ben Searancke, 43-year-old father to a 9-day-old daughter is sweating out opioids but otherwise fine.

And we must, at this very second, get the whole harrowing story.

Searancke went out for a surf shortly before 11 am when his leash plug pulled out of his board on a duck dive.

“I wasn’t panicking really because I thought I could make my way in,” he said. “Then I put my head up and I was 500 metres around the northern end, which was nothing but rock. I tried to start swimming back towards Karekarei but I just couldn’t. I was looking around and all I could see was just swell hitting rocks and I knew I wasn’t going to be able to swim back around.”

He knew he was in big trouble.

“I had nothing. I was in the middle of the ocean. No beach in sight. No people in sight. Then getting pushed towards rocks with heavy water. A wave just grabbed me and threw me against the rocks and I covered my head and got scratches all over my body but I felt my leg get a really bad bang. I think eventually I managed to climb up and I looked down at my leg and my bone was showing on my right hand side.”

He clung to the rocks for a few hours, fashioning a tourniquet out of his leash, trying to get some strength.

“[I was] bleeding and getting pretty cold, and every time I thought I was nearly there, there was like a point between rocks where you couldn’t make it around. So I had to make a call to try and swim across. I looked at the waves, timed it, and I looked at a point on the first one and I went I’ve just got to go. I got smashed against the rocks, on top of my head. I felt a bit dizzy, I was held down for long enough to start thinking this is it, it’s definitely over, and then I struggled to get back up. That time my brain was definitely going. I could see my daughter, I could see my missus and I was going ‘this is it’. Then I finally made it round to Mercer Beach and then I kind of realised shit, there’s no one here. I don’t even know if there’s a way out of here. I started to feel like I was going to faint.”

It was at that moment that he let Tom Hanks be his guide.

“Honestly I had watched this movie Cast Away two weeks ago and Tom Hanks wrote help in the sand. Kiwis are Kiwis, I know that they might just walk past and I was desperate. If they just walked past I would be stuffed so I thought if I wrote HELP and they were looking at me, surely that’ll engage them enough to do something. I did it as good as I could, and then literally as I got the P, I collapsed, trying to stay conscious.”

Kiwis are Kiwis? What does that mean? Do New Zealanders not like to help people?

Well, in any case, legends and non-typical Kiwis Vanessa Ingraham, 36, and her friend Dace Kalnina, 32, were hiking on a coastal track, saw the message and sorted help.

Searancke was snatched up by lifesavers, transported to a hospital and stitched right up. “I haven’t slept a lot. I didn’t sleep at all last night for the pain, that’s why I went back [to the hospital] this morning [Saturday]. So they’ve put me on really heavy meds. I’m sweating like a maniac.”

The only part of the original story I got wrong was attributing Searancke’s inspiration to Sting instead of Tom Hanks.

Which is your favorite Hanks vehicle?

I’ve got to go with Joe versus the Volcano.

Ben versus the Rocky Outcroppings.

Italian new wave: the top surfing spots only a short hop from Rome

Italian new wave: the top surfing spots only a short hop from Rome