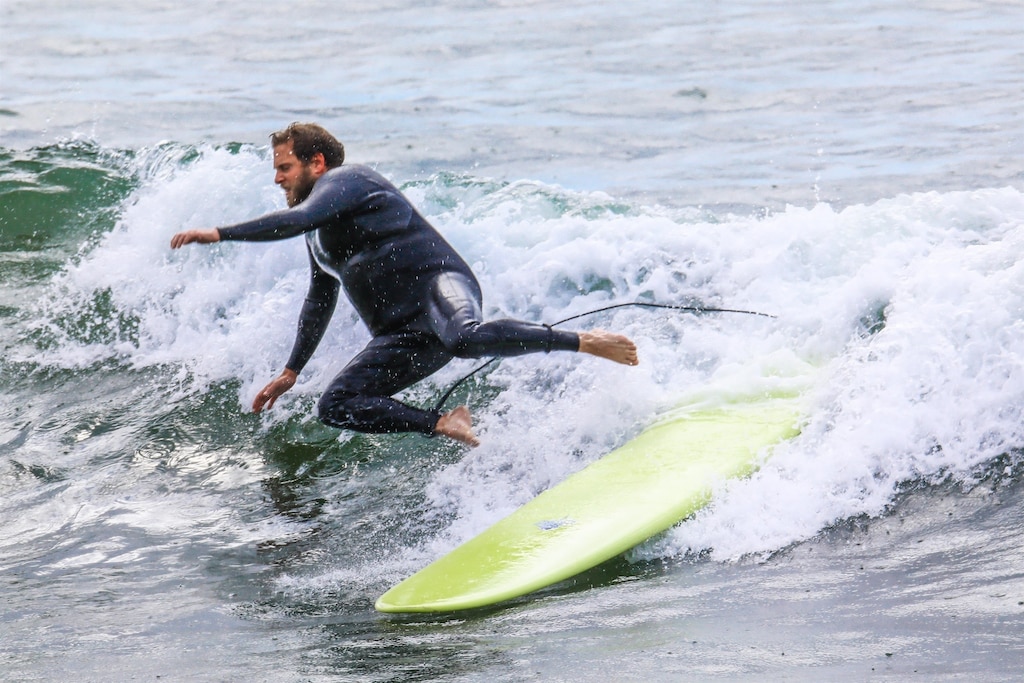 There’s a Wozzle problem with talent, or the lack of it. Guys retired three years should be not be in the conversation with hyped rookies or second-time rookies.

We didn’t get a great deal of meat on the bone for day One of the Newcastle Cup, let’s be honest.

Bit of aerial tomfoolery from current World Champ Italo Ferreira, a strong signal from JJF that he’s ready to throw down in whatever Mumma Nature sends his way, not at all spoiled by the best Hawaiian winter in a decade.

Today, thus, was a little more voluminous for the surf fan, starting with the surf size and shape, which was as exuberantly over forecast as day ones’ was unders.

Many, many moments where we could have been fooled into thinking we were watching Bells Beach. The thick, sloping outside wall which offered scope for two committed majors, was quite aesthetic, despite being tagged “fat and gutless” by heat winner Owen Wright and “flat” by Stephanie Gilmore.

Much dead water to plane across before a rambunctious shorebreak begging to be hammered shut.

No real dramas unfolded so a few scatter-gun observations to chew on below.

Straight up can we give props to rookie Isabella Nichols who accounted for Tatiana Weston Webb in Heat two of the round of sixteen. Some nice big chunky hacks, I want to say reminiscent of a female Matt Hoy if that were to be taken as a compliment.

But I was more impressed with the acumen of Nichols in the short profile piece they ran with the heat.

“I want to entertain,” she said.

My heart sang. She gets it.

Tyler Wright, most entertaining women surfer on Tour, also gets it.

I almost exploded on day one, when in a comment in the Booth she said she was sick of the pally-wally cutesy-wutesy charade of women’s surfing and wanted to bring more aggro, more naked competition and emotion to the caper.

It was like we were communicating on a telepathic level, the way Norman Mailer claimed he could do while watching TV in his seventies book Pieces and Pontifications. Rabbit Bartholomew was also suitably impressed. Joe Turpel managed to change the subject.

More on Tyler’s losing heat in a moment.

There were some rare moments of truth today from the booth. Well, Luke Egan leaning on the railings at least.

Egan took aim at the performance disparity between what he termed the “QS” surfers and the established CT stars. That was a fair reflection on reality specifically on Matty Banting, who had been relentlessly pumped up by the pre-tournament hype.

His failings as a CT surfer from the first go around were ruthlessly exposed on this go out in chunky, fat overhead walls.

No major turns. You can’t win heats at a CT level without big turns.

Compounding the failure were the two best surfers on Tour at almost perfect completion rates on 75% power turns. That being Adriano De Souza and Owen Wright. De Souza is retiring at the end of 2021, Owen was last runner up in 2011, a decade ago.

But they both made Banting look like a total amateur.

That sounds cruel. I don’t mean it to be.

There’s a Wozzle problem with talent, or the lack of it.

I saw a stack of CT-level surfing last year and by far the best of it was Mick Fanning. He would have won any heat out there today. He’s been flogging Ethan Ewing in mock heats all summer long.

Is this a problem?

I see this as a problem.

Guys retired three years should be not be in the conversation with hyped rookies or second-time rookies.

Julian looked great on day one in a losing heat. He looked better today. He easily smoked Mikey Wright and Jack Robinson, whose turn game in performance waves still looks a little jittery and staccato to my eye.

You could easily imagine a Tour with a start at Pipe and a finish at the Ments or Cloudbreak where Jack could rack up back-to-back Titles.

You can’t imagine him winning one at Trestles.

Tyler went back from the white Enough is Enough board of day one to a Forest Green Black Lives Matter sled for today.

It was a highly orchestrated thirty minutes. A continuation of her heat and appearance in the booth from nearly a week ago.

During that stint she evinced a heat strategy that would involve the bikini, as a method of trimming any excess weight from the board/body ensemble and allow for the maximum freedom of movement.

The first time I had heard of that strategy, but with an easy to follow logic.

I and many others will choose boardies/trunks over rubber for the same reasons. OK.

She also name checked the team strategy she and Micro had been working closely on and then proceeded to paddle out and sit in the inside rock break near the shorey.

This is a “remarkable strategy” he claimed, calling it “dangerous” and “risky”. The problem was leaving the red wetsuited Courtney Conlogue out the back solo. There was obvious communication between Wright and Micro, and after Wright had shredded a trio of waves for a heat lead with twenty minutes remaining it looked like brilliant tactics.

Out the back she went.

All event commentators had over-cooked the importance of wave selection, when surfing performance was by far the telling factor.

In this case though, it was critical.

Conlogue cut her snaps short compared to Wrights by far superior full gouges but the large set wave that Conlogue rode for a flat seven was hard to deny.

Did she get cold in the bikini? Legs cramps a little? Was that a crucial tactical error?

The winning wave came after a seventeen-minute wait and Wright over-cooked it. That fall was the end of the heat. A very good debrief awaits when they roll the tape on a heat she should have won.

Marks did enough to join the dots in deteriorating conditions to get the W on Brissa Hennessy and the performance gap between men’s and women’s tours outside of wave of consequence continues to narrow.

A non-gendered wave pool comp has to be on the agenda.

Many juicy match-ups await in the mens round of thirty-two.

Some serious upsets if not.

Morgan of the earth, let’s be clear Morgan Ciblic grew up surfing at Angourie – Breakfast